In a field of work that can often be frustrating, small successes are a call for celebration. This past week was one of those weeks at RUDEC.

Three months ago, we (Joshua and I) set our focus on expanding access to financial opportunity to more women in Belo. Our main goal was to support the income-generating activities of local women by providing small loans. In addition to that, we wanted to provide an environment in which these women could work together on their own accord to design the framework for their own development. Our hope was that these efforts would work to build the capacity of women—specifically single mothers—to become more economically independent and in better positions to provide for their children.

We identified two groups of women in the village who were interested in participating in the project. In the first month of the project, we met with each group twice a week to evaluate each woman’s business or business idea, determined their eligibility for the loan, and advised the group in creating their own group rules/policies for the loan. The driving force behind each group was the idea that their repayments of the loan would be used to help even more women in the future. 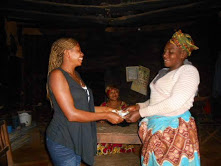 Two months ago we distributed a loan of equal amounts to each woman who agreed to the terms their group had decided on. On the day on the loan distribution, we all communed with one another, and the air was heavy with a sense of unity and hopefulness for what was to come. Each woman made a pledge, not only to herself, but to her fellow sisters who were there to support her in her own endeavors. Appropriately, we decided to name this initiative “Belo Beautiful”. Several group meetings, training workshops, and business consultations later, each group proved its ability to sustain itself. Each group has an active executive board, which manages and records all aspects vital to move the project forward.

This past week marks two months since the distribution of the loans, as well as the women’s first repayment! Each woman (13 in total) paid their first interest-free installment of 6,000 francs. The best news is that enough money was repaid in order to provide two new women with a loan as well.

I am happy that the project has proven to be sustainable thus far. Although I am no longer in Belo to celebrate this step forward with the women, I am celebrating in spirit from afar and looking forward to more good reports. We are now at a group of 15 women and hope to continue to see manageable growth.

Many times, the hard work of Cameroonian women goes unnoticed. Women are arguably the backbone of Cameroon’s agricultural economy, yet hit the glass ceiling of gender-discrimination and societal expectations in many areas of their lives. Much of the reason for women’s struggle to gain income in this agricultural economy has to do with their acute lack of credit and inability to raise enough money to engage in lucrative business. Our vision is make the rural town of Belo a safe-haven of economic opportunity and empowerment for women by highlighting the vital role that women play in society and providing women with access to economic opportunity. It is also our hope that the Belo Beautiful initiative elevates the voices of the hard-working women of Belo and provides them with the tools to activate change in their own lives and community.

LOOKING FOR A PROFESSIONAL VOLUNTEER!

Newsletter for August and September 2016

Transparency is important for us: